While we were in Maine we had hoped to summit the state’s tallest peak, Mount Katahdin (elevation 5,268 feet). This tall point didn’t seem an improbable summit for us to reach. Jack has reached higher elevations with longer trails several times before. However, while researching the trails we soon learned that children under the age of six aren’t allowed above the tree line at Baxter State Park, where the trail and mountain are located. We tried our best to research the rule online but decided a phone call to the park might be our best bet. We had read a few people’s comments online that the park staff were less then friendly and soon discovered just how true that statement was. The woman I spoke to on the phone was incredibly short with me, treated me like I had never been hiking and couldn’t possibly understand how difficult the trek was, and eventually hung up on me when I continued to ask questions. The easy answer they give for why children aren’t allowed above the tree line is because their search and rescue crews aren’t equipped to rescue children. I have a large gripe with this. Does this mean that if my child were to be injured in other areas of the park that they wouldn’t be able to help us? What is it about hauling a small human being out that would be so much more difficult than a large adult? The conversation left me steaming and wondering how they could possibly have such an odd rule at a State Park. More research turned up that the park isn’t technically a “State Park”. The land was donated by Percival Proctor Baxter who was the governor of Maine for a short time in the 1920s. The park is not funded by the government and is actually self-sustained through timber harvests, entrance fees, and grants. The park has numerous odd rules like, no motorcycles of any kind are allowed. BUT, you can snowmobile there in the winter… How does that make sense?

After we had learned more we had pretty much decided we wouldn’t venture to the park. However, while we were in Maine the fall foliage was peaking in that part of the state and the park does offer a variety of hikes that are located below the tree line. So, we drove the 3 hours from our cottage in Central Southeast Maine to Northwest Maine. The day had a slight chance of precipitation but the weather was actually looking pretty good as we drove into the park. The roads in the park have incredibly slow speed limits and we were warned by other visitors online to be sure to follow the slow speeds because the rangers were notorious for ticketing. So, we drove the ridiculously slow 20mph for over 8 miles down the road to the trailhead.

Another tidbit about the park is that, upon arrival, you must check in with the ranger, pay the $8 entrance fee if you aren’t a Maine resident, provide them with emergency contact information should you get lost, and tell them specifically where you plan on going for the day. You are given a permit to park in the lot of the trailhead you are headed for. When the quota of cars has been reached for that trailhead then you’re out of luck and have to choose a new destination. Thankfully, by the time we arrived our trailhead, Roaring Brook Campground parking, wasn’t full and we were admitted without incident. During the summertime you can reserve parking for select trailheads up to two weeks in advance online for non-Maine residents.

We met a middle-aged couple in the parking area that were rather smitten with Jack who was busy running around like a crazy man after such a long time in the car. We chatted with them a bit and learned that they were there to meet their son who, at 25, was just completing the Appalachian Trail. Mount Katahdin is the endpoint of the 2160 mile trail. They mentioned they’d been hiking with their son since he was a baby which made us dream of what amazing hikes Jack will do once he’s older.

The colors were stunning as we set off on the trail and the rocky, uneven trail was blanketed in the bold colors of autumn. Our destination for the day was Chimney Pond. At 6.6 miles roundtrip with 1400 feet of elevation gain it would be a solid day hike with, hopefully, stunning views of the fall colors. The weather at the trailhead was pleasant and sunny. As we hiked up the trail, and were drawing closer to Mount Katahdin the weather began closing in. The mountain itself wasn’t visible through the thick cloud coverage. Rain spattered down intermittently as we made our way to the first lake along the trail, Basin Lake. As lunchtime neared I wanted to stop and eat. Bobby was keen to reach the first lake and enjoy lunch lakeside. So, I pulled some snacks from my daypack and munched as we hiked. As we neared the lake we also neared the inclement weather that surrounded the mountain. We reached the edge of Basin Lake and were nearly blown over by the tremendous wind making it’s way across the surface of the water, bringing with it a biting cold. Rain poured down on us as we tried our best to take in the scenery. It was past noon. And, therefore, past lunchtime. Jack, seemed oblivious to the weather, as he was protected by his Osprey Poco pack with it’s attached sunshade, and an umbrella being held over him. The wind wasn’t nearly as fierce inland and away from the lake so we made our way back to the main trail. We did our best to squat down in a spot slightly off the trail and ate soggy sandwiches in the rain. Jack thought it was a pretty good adventure! Lunch in the rain!

While Jack and I finished up our lunches Bobby ran back to the lake to take a couple of pictures with his phone (we didn’t want to risk getting the camera wet).

The view of Basin Lake and the storms around Katahdin.

Bobby returned to us and we discussed our options. Should we continue on to Chimney Pond and risk worse weather as we continued to near the mountainous terrain? Or, should we cut our losses and return to the trailhead? We were wishing we had spent the money and invested in a rain suit for Jack before the trip. Had we done that, we most likely would’ve continued onward. But, knowing he wasn’t equipped properly for a day in the rain, with only his fleece snowsuit as protection, we opted to turn around and head back to the trailhead.

As we headed back down the trail the weather seemed to improve with each step. We reached a small, almost hidden junction, for a lookout point and decided to brave the nearly flooded trail and check it out. Here the sun was shining and we enjoyed the spectacular views we were hoping to find. The boldness of the reds was beyond what we had expected.

We were delighted that we even got to see some of our favorite larch trees in full gold! We love our larch trees!

We were so glad we made the slight detour here and got to see some glorious views!

As we made our way back down the trail we were soon shedding layers as the sun had come out and we enjoyed a delightful day on the trail. Upon reaching a trail junction, about .2 miles from the trailhead we opted to take a bridge over Roaring Brook and allowed Jack to play and explore on the 1 mile, Roaring Brook Nature Trail. Jack is usually confined to the backpack when we hike but, as he gets older and more capable we want to give him opportunities to hike and explore on his own. We were amazed by how well he did navigating the rocky trail, only stumbling a handful of times. We were soon all exhausted and decided it was time to say our goodbyes to Baxter State Park and make the long drive back to our cabin. While I really didn’t want to visit a park that has such strange and strict rules, I’m glad we did. The park was clean with well-signed, well cared for trails. We met a couple of rangers throughout the day and were treated nicely and respectfully by all of them. The park itself has no electricity so when you call you are talking to the rangers at the office located in the nearby town of Millinocket. It was a pity that the weather didn’t cooperate better but we had an enjoyable day on the trail nonetheless! 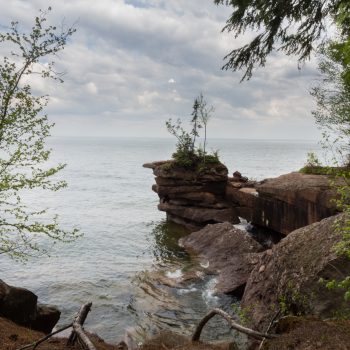 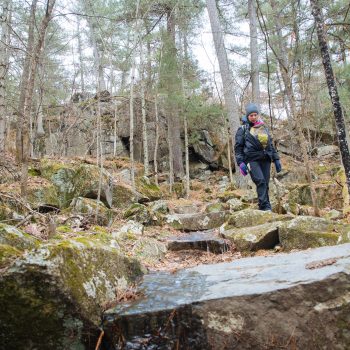 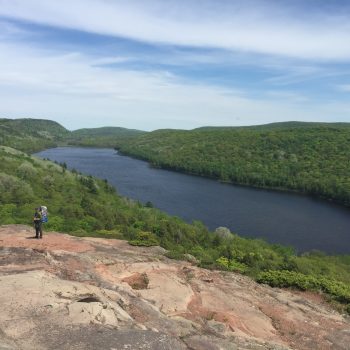 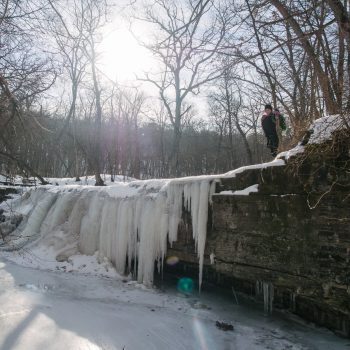