Disclaimer: We turned back before reaching the lookout atop Granite Mountain. If you want to read a story of success and sunny blue skies then check out our Granite Mountain post from last October. It just so happens to feature one of my favorite photographs. If you want to read a story about some friends having a good time in the mountains on a day where the weather forecast called for a winter storm warning then read on.

I spent Friday and Saturday on Mt Baker’s Heliotrope Ridge and when I got home I found texts on my phone from my friends Paul and Patrick about trying to do something fun on Sunday. My legs were toast from snowboarding/hiking miles with a heavy splitboard on my back, but without Maura and Jack around I wanted to seize the opportunity for some guy time. Plus, sitting around at home would just make me miss that little guy’s smile so much more! Unfortunately, I passed out at some crazy early hour from exhaustion and missed all further texts from the guys about what the heck we would actually do.

The weather forecast looked terrible. There wasn’t enough snow for skiing without driving really far or ruining your skis. Lazer tag and the Vancouver Aquarium were both tossed out as options, but eventually we settled on driving up I-90 until something caught our fancy. As we drove the rain got heavier and we all agreed that hiking in that heavy rain wouldn’t be fun and that we’d push on until we could hike in the snow. Snoqualmie Pass had different plans for us. The signs on the freeway said the pass was closed at exit 47 so with this new information we decided to drive to the closure and hike Granite Mountain as far up as we could go.

I’ve been lucky enough to not be stuck on a closed pass in my life. But today was the day that streak ended. Apparently “closed at exit 47” really means “closed 500 feet in front of exit 47”. So there we sat for a half hour (could’ve been much worse) as we stared at the off ramp that would lead to our hiking salvation. After some atlas perusing, phone calls to old friends in California, and games on our phones we were finally allowed to exit. Surprisingly there were 7 or 8 other cars at the trailhead. I should really stop underestimating Seattleites willingness to hike in bad weather. After making some quick decisions about what gear to bring and what gear to leave (we  decided against carrying up our snowshoes) we headed up the trail. The trail was clear of snow at first and fairly muddy and wet. The previous day’s snow was dripping from the trees making us very wet so I pulled out the umbrella I use to cover Jack when we hike and kept myself nice and dry. I think Paul and Pat were laughing at me … We made quick time to the trail junction where you take a right to go up to Granite Mountain and then started hoofing it up the long switchbacks. Patrick and Paul were cruising along and I struggled to keep up with my tired legs. As we carried onward we passed a couple groups making their way down. They warned us of hip deep snow up ahead which lowered my steadily rising expectations of actually being able to reach the summit. The snow alongside the trail steadily grew taller but the path was still clear and easy to follow due to all of the previous hiker’s footprints. At times things would get a little slippery with the wet slush under the snow but it wasn’t too difficult with proper footwear.
Once above the treeline we entered a winter wonderland. Knee deep snow covered everything but we were still able to make quick progress due to the well-trodden path. The summit in sight (behind the clouds)

And then for a second the clouds parted and we could see the lookout. We were all so excited! It was so close! By the time I got out my camera it had disappeared into the clouds again and we continued onward. Pat’s rain pants were letting some snow into his shoes which was causing issues so we weren’t sure how much further we could get. Shouldn’t have left that extra pair of gaiters in the car… The well-trodden path we had been following abruptly ended. It was the end of the line for everyone else but we had summit fever. Paul took the lead and post-holed his way through the fresh knee deep snow. We tried to follow the ridgeline to stay in the shallowest snow based on how the wind had deposited it. We were only moderately successful at this. Pat’s footwear started causing more problems due to a melted toe from getting too close to a fire pit years ago which started to let water in. We had to put our macho-ness aside and discuss turning around. At this point we had little reason to finish the last 2,000 feet of hiking to the summit since it was in the clouds up there. We all agreed it would be best to go back and so we did. But first a selfie! Granite Mountain has a history of deadly avalanches. It was very on my mind when we decided to do this hike since last year Maura and I were driving home from a hike when we saw the search and rescue vehicles looking for a skier who triggered an avalanche. Paul, Pat, and I watched the snow conditions carefully and felt safe given the relatively small amount of snow (it was never over knee deep), abundance of anchors, and the terrain we were on. The main avalanche chutes had even less snow and a plethora of rocks were poking through. But it won’t be long before there’s enough snow to be dangerous and I’m going to steer clear of this mountain until it melts. Also note that the winter trail heads straight up the mountain instead of winding through the summer trail’s switchbacks through the avalanche chutes. We did get some nice views across the valley and the clouds came in some funky colors at times (although I didn’t get any pictures of that phenomenon) . Cruising on the way down

The hike back was uneventful. My proudest moment was when I was leading and the guys commented on how fast I hiked down the mountain. It made me feel better about going so slow on the way up! Hiking poles were also very helpful for avoiding slipping and falling on our butts from the slush.

We didn’t summit but we still had a great day in the mountains together. On the way back to Seattle we ate dinner at the Issaqah Brewery which never fails to delight. Then I went home and went to sleep super early again! Two awesome days out in a single weekend. Can’t wait to see what I can brew up for the next weekend!

View all of these photos on our Facebook page 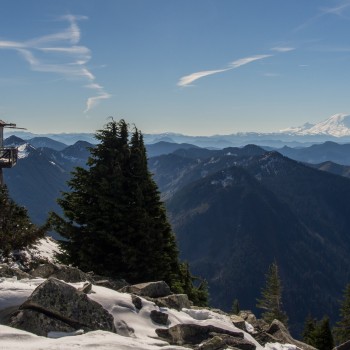 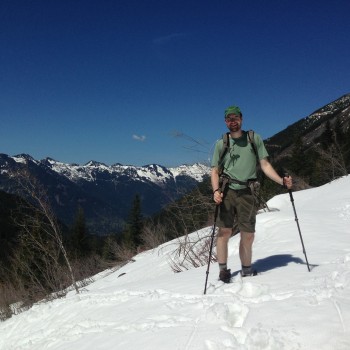 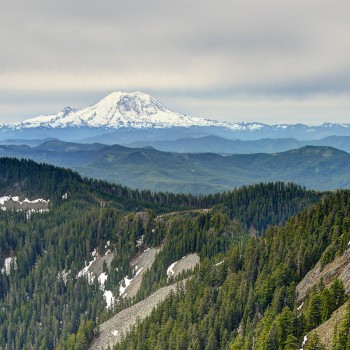 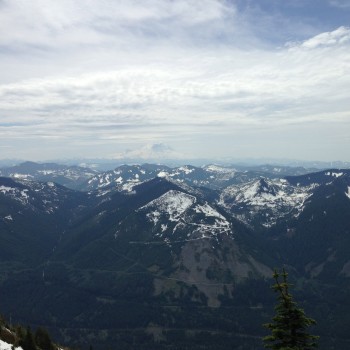 From Seattle take I-90 East to exit 47, turn left at the top of the exit ramp to cross over the freeway. At the T junction turn left to reach the trailhead.