Back in June 2012, Maura and I went for our first day hike as Washington residents. Scouring through our new guidebooks searching for a good hike I made the ill-conceived decision that we should start out with one of the ‘more difficult’ hikes. Coming from Minnesota we didn’t have an understanding of how elevation gain added to the difficulty of a hike or how there could still be snow in June on trails. That day we only made it in a few miles before deciding to turn back at an avalanche gully after trudging through a few feet of snow. Ever since, as we’ve driven by McClellan Butte on I-90 I’ve sworn to myself that one day I’d get to the top. Together with my friend Dave we set out early Saturday morning – Maura’s 36 weeks pregnant so she sat this one out. McClellan Butte bears the namesake of George Brinton McClellan who was a major general in the Civil War and a Democratic presidential nominee in 1864. His relevance to Washington is that he scouted a route from St. Paul, Minnesota to the Puget Sound for the Pacific Railroad. He didn’t do a great job and missed other easier to cross passes like Snoqualmie Pass and recommended Yakima Pass. Dave starting out on the trail

This trail is a good alternative to some of the more popular I-90 summit hikes like Mount Si. We hiked it on a beautiful Saturday and only passed 12 other hikers. The trail also offers a 100-foot scramble to the summit block that adds some excitement and adventure. The scramble is very exposed and requires common sense – don’t climb it during rain or snow. Crossing through an old clear cut

The trail starts right next to the privy at the trailhead. Pass through cedars, firs and hemlock as you work your way along the trail. At .5 miles in the trail follows an old closed forest road and .5 miles from that junction you’ll cross the Iron Horse Trail. The McClellan Butte trail is well-signed for these intersections. Wildflower along the trail A switchback early on the hike In another mile you’ll cross FR-9020. You might notice a few cars parked nearby. It is possible to drive this road from Exit-38 but the road can be locked at anytime and there isn’t much room for parking along the road. Past FR-9020 the trail begins to steepen and you’ll soon encounter a number of switchbacks. A variety of wildflowers were blooming along the trail at all elevations. Cross a talus field and enjoy your first views From here the trail begins to steepen

Keep a lookout upwards as you’re hiking. Every once in a while you’ll get a glimpse at the summit overhead. Unfortunately, the trail wraps around the backside of the mountain so it’s a little deceiving how close it looks.

1.7 miles further (at 3,379 feet) we started to hit snow. Four of the avalanche chutes were still holding snow and our microspikes helped give us solid footing while crossing them. Dave and I took turns going first and kicking in better steps for crossing. It was still early so the snow was very hard – by the time we were heading back later in the day the snow was much more slushy and there were several more steps kicked in to follow. Due to the low snow cover these crossings were very easy but you wouldn’t want to do them without an ice axe and more mountaineering experience earlier in the season. Looking down one of the smaller chutes

0.9 miles past the first avalanche chute the trail reached the border with the Cedar River Watershed. Peering down into the valley we could see Chester Morse Lake – the reservoir for some of Seattle’s drinking water. The beautiful day also greeted us with great views of Rainier and a tease of what’s to come at the summit! We encountered a couple of blowdowns on the trail Getting closer to the summit!

As the trail proceeded to the northwestern slope of the mountain the snow became continuous. Soon we were following faint boot tracks in the snow and pulling out my GPS every few hundred feet when we lost the track we were following. At one point we started heading up a steeper slope until I realized the path I was following was from a mountain goat. With a little poking around we were able to find the track again – but our path didn’t follow the summer trail. Once the snow is gone the trail will be much easier to follow. Microspikes came in handy during this section of the trail. As the summit got closer I started to get more excited and less careful with my steps and I ended up falling and sliding a bit. It was a good reminder of how careful you need to be on snow and that I should pay more attention. 0.9 miles past when we reached the border of the Cedar River Watershed we came to the saddle just before the summit block. There’s a great view of Rainier from here and if you’re not comfortable scrambling to the summit this is still a great place to turn around. Looking up at the summit I was really excited to climb up there but I was also a little nervous. Looking to the east of the ridge there’s a few hundred foot drop off. But the route upward looked to offer big solid holds and wasn’t too steep. Dave makes his way up

On the rocky section there are remnants of an old handrail that was in place. Looking around online I found people arguing whether it was right of the Forest Service to remove the handrail or not. Honestly, I’m glad it isn’t there – it adds something special to the hike to scramble to the top and having a safety rope pre-placed would take away from that feeling. Flowers on the summit From the top we enjoyed great views of 4 volcanoes: Rainier, Adams, Mt. Baker, and Glacier Peak. It was also fun to point out to Dave the other mountains I’ve summited nearby like Mount Si, Granite Mountain, and Bandera Mountain. It was Dave’s first summit on a bigger mountain and we couldn’t have asked for better weather. He’s also in really good shape and pushed me to keep a 3mph pace for the entire hike until we got slowed down by the snow. Looking across the I-90 corridor We spotted 4 mountain goats below the summit

Besides the great scenery, we also were able to spot 4 mountain goats munching in the meadows below the summit. Peering over the edge of the summit down a 200 foot cliff was a lot of fun too! Buried in some rocks we found the summit register and added our names before munching on some Swedish Fish and heading back down. We were running late based on the time we told our wives we’d be back (Sorry Maura and Joan!) so we hurried back down. Almost back to the trailhead I suggested we follow the old trail on my USGS topo because it looked shorter and more direct than the new trail. After a little bushwhacking we were able to easily find and follow the remnants of the trail. But soon we were faced with crossing Alice Creek in an area where it splits into multiple smaller creeks. There were some old scraps of bridges littered about and we found ourselves jumping across rocks hoping to find the trail on the other side. The trail couldn’t be located so we followed our GPS towards the car, crossing through a recently cut forest on our way and pushing through a lot of overgrown understory. Definitely take the normal trail back and don’t go the cross-country route we struggled through. Crossing a stream trying to find our car 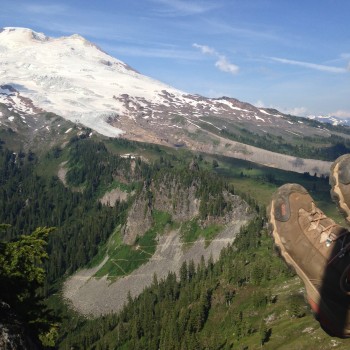 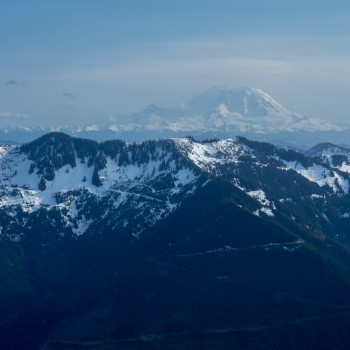