We have spent the past two Saturdays snowboarding at the Summit at Snoqualmie West Ski and Snowboarding Resort which means that our poor Latigo has been denied an outdoor adventure for far too long. Though a bit sore from our previous day on the slopes we decided we should take our dear doggie out for a romp in the woods. We also realized that with Christmas coming and a trip home to Minnesota on the calendar we won’t be able to have an adventure next week, so why not have a double header weekend to compensate!

We got a late start and headed off along 90 with the Denny Creek trail in mind. It is a four mile long trail with only 700 feet in elevation gain.It seemed like a good fit for our stiff legs. According to the Washington Trails Association, “Denny Creek may be the most family-friendly trail in the region.”

As frequently happens, we never got to the trail we had planned on. The road we were to take hadn’t been plowed all the way to the trail head so we joined several other vehicles and parked alongside the road and began our trek down the middle of a road. A few larger 4Wheel Drive vehicles did venture down the road, we also saw smaller vehicles stuck and assisted in pushing them out. While we realized our Explorer could’ve probably made the journey we opted to walk. 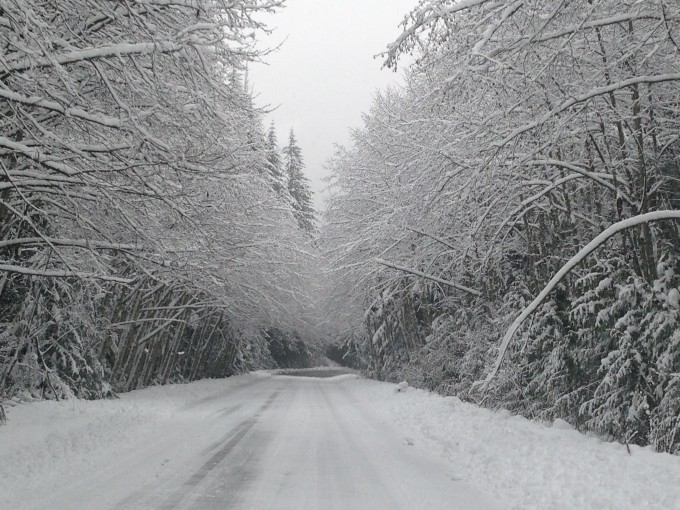 On the road to the trail

We found a small trail off on the side of the road that was well trodden and decided to venture off! It led to a snow-covered and closed campground. It was the Forest Service Denny Creek Campground. According to the Forest Service, “this is one of the oldest Forest Service campgrounds in the forest. The trail wound through the campground and eventually led us to the parking lot that had been our original destination. Once there we discovered there were several trail options to chose from. We could hike to the Wagon Road Trail, Franklin Falls Trail, or the Denny Creek Trail (the trail we had originally planned on snowshoeing).

We were already feeling fatigued from our brief walk thus far so we decided to go for the short and easy Franklin Falls Trail. 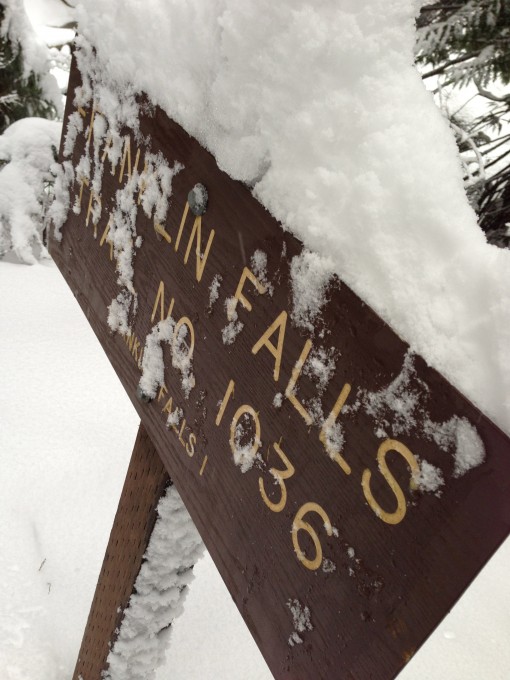 At only two miles roundtrip and only 400 feet in elevation gain it proved to be the perfect distance for us! Latigo was having an absolute blast on the trail! Being a Minnesota-native Latigo loves the snow! He jumps, frolics, and frequently stops to eat the snow and always has a big dopey grin on his face! 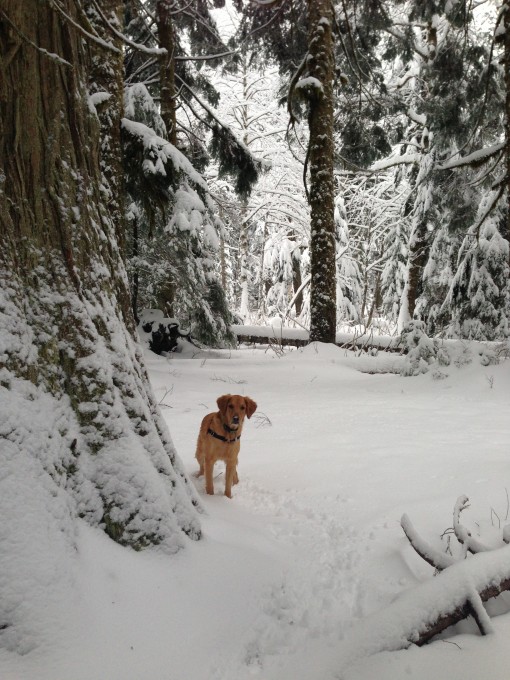 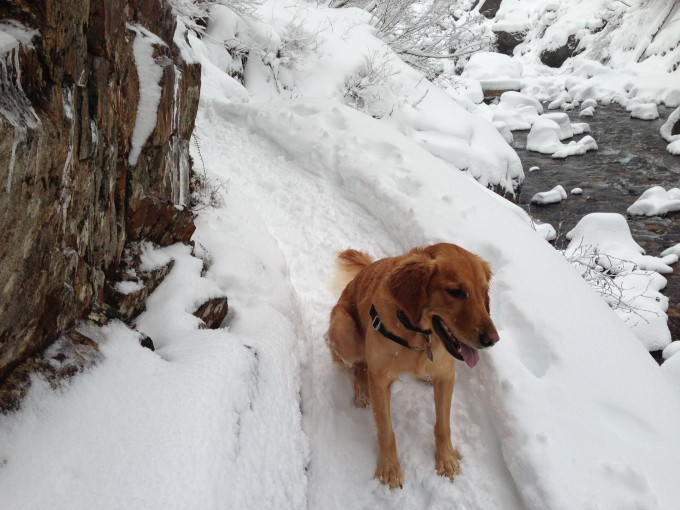 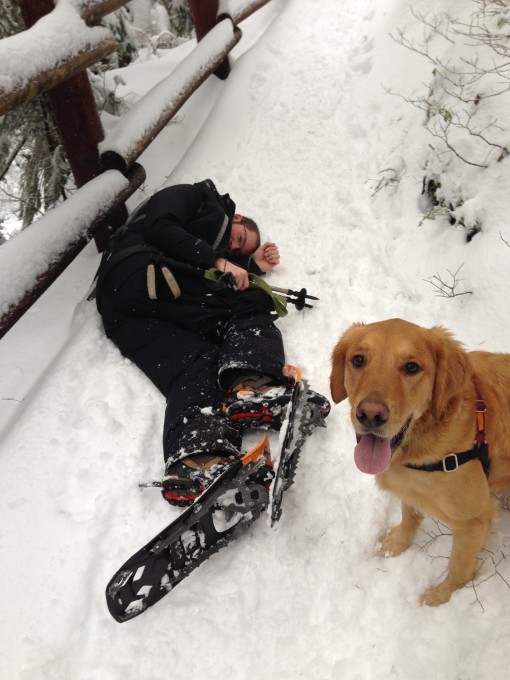 The hike ended at a picturesque waterfall tucked in the cliffs. Sadly, it had a rather alarming proximity to the freeway… In spite of that, it really was beautiful and the snow and ice made it feel like we were in a hidden winter wonderland! 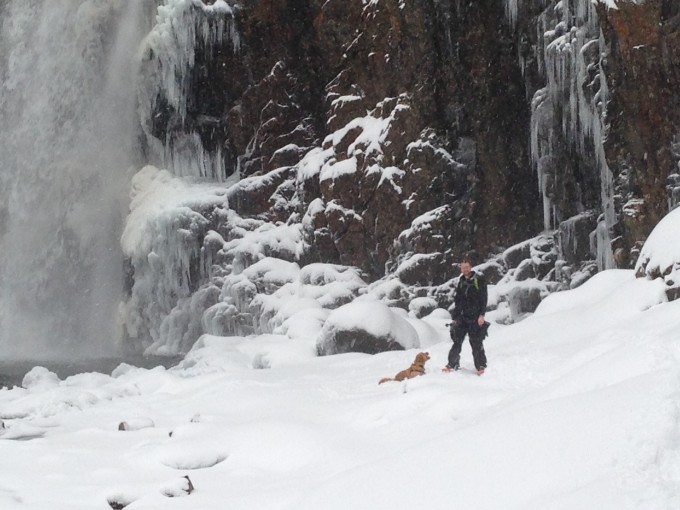 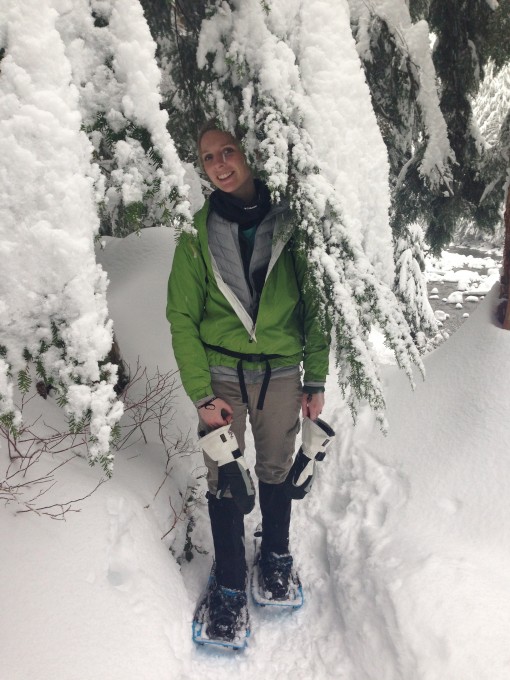 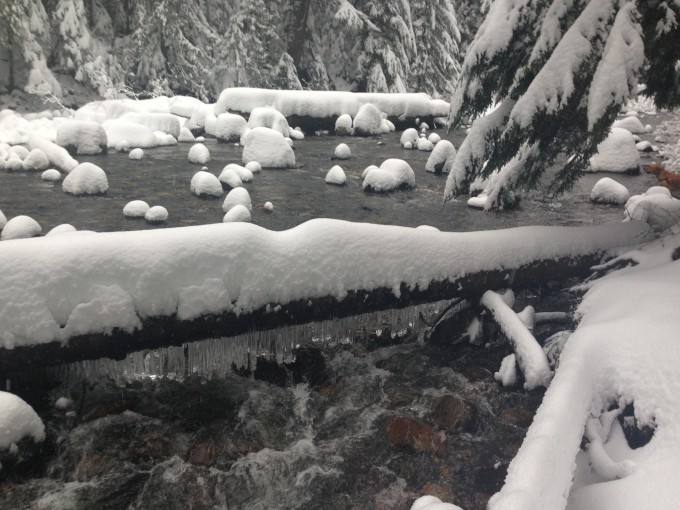 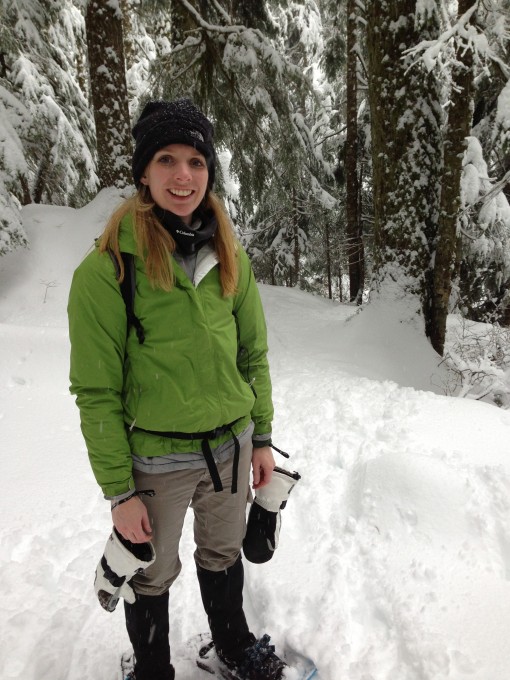 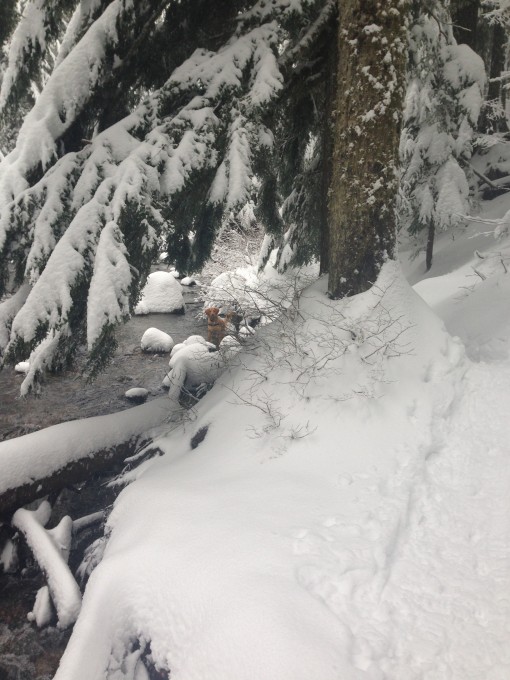 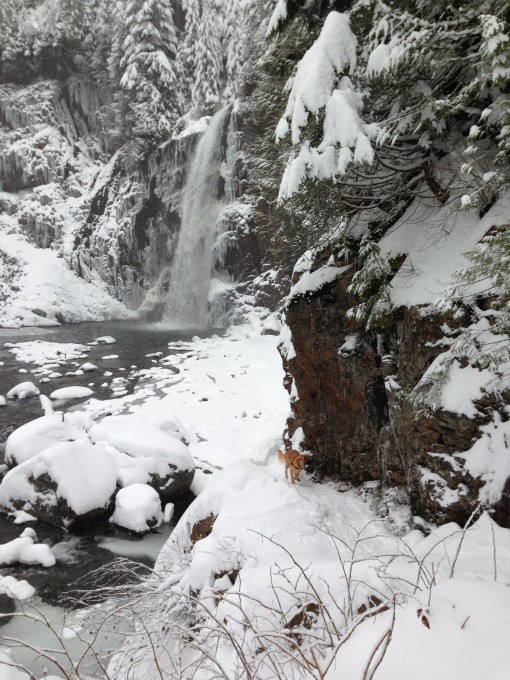 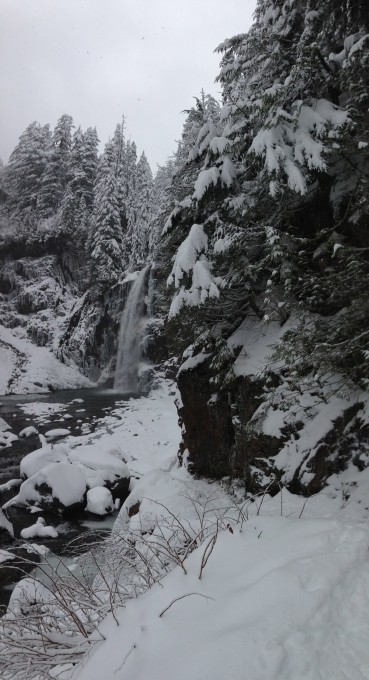 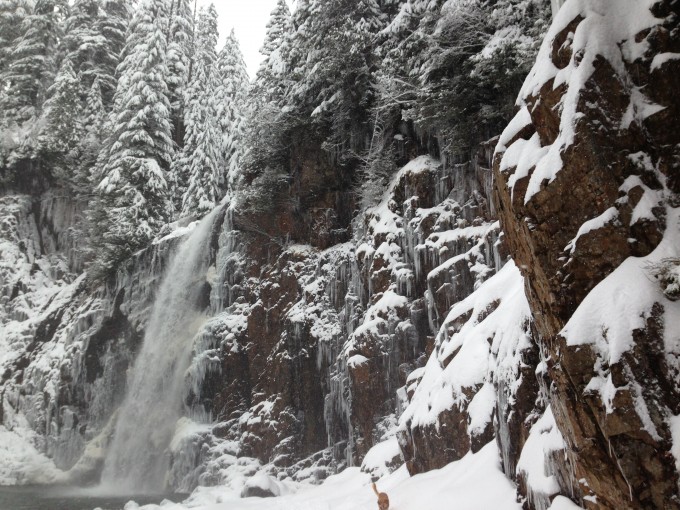 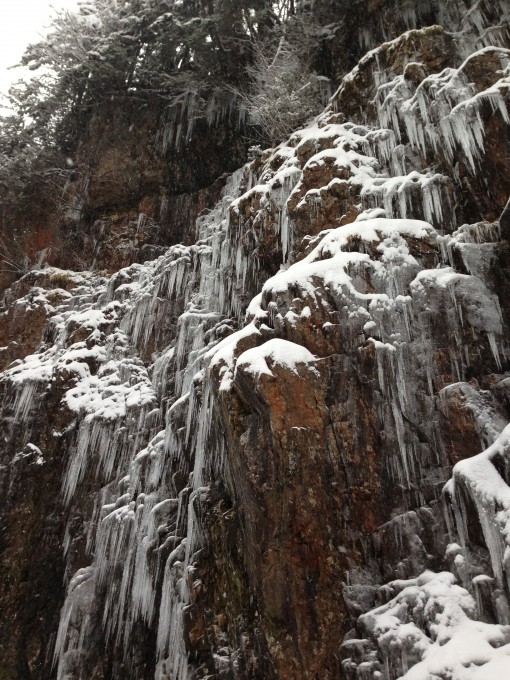 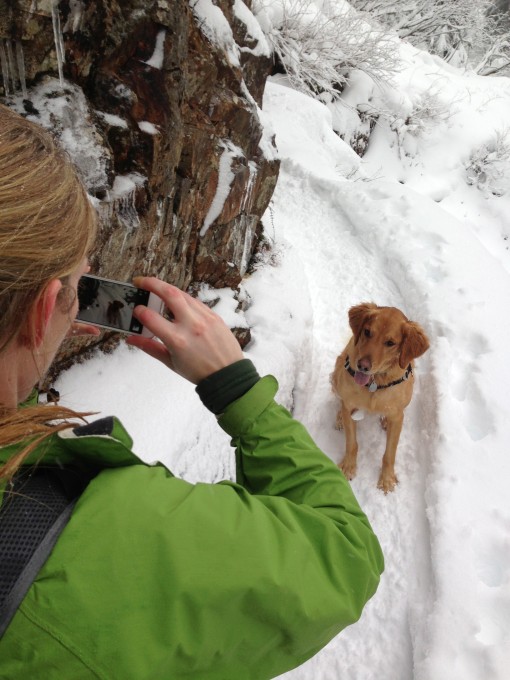 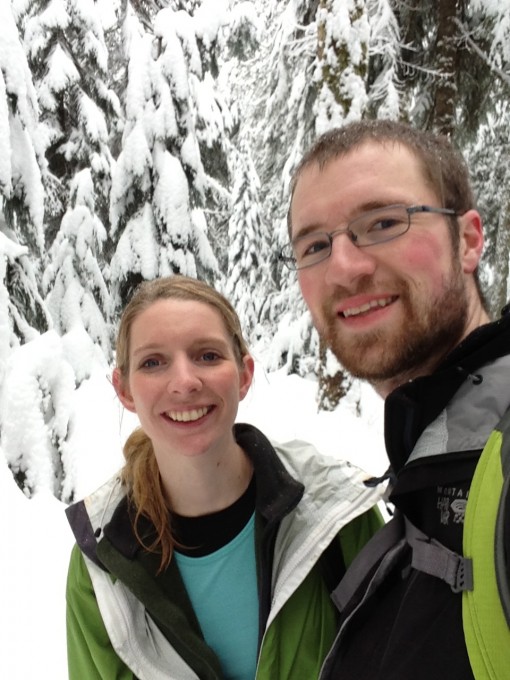 We have found that winter seems like a great opportunity to visit the more family-friendly and more populated trails. We still encounter several groups on our trips but I’m sure that were we to do the same hike in the summer the number of people would be overwhelming in areas like these. 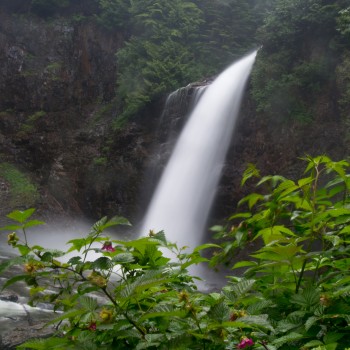 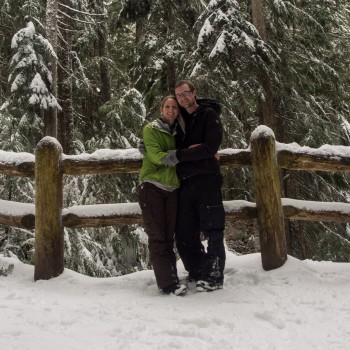 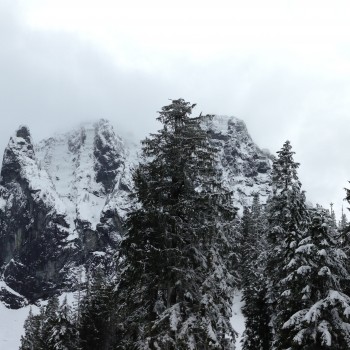