Fall has officially hit Seattle and the rainy weather convinced me to road trip the 2.5 hours out to Vantage for some sunny rock climbing. Friends Casey and Matt joined in the shenanigans and of course Latigo came along for the ride as well.

We got a moderately early start – everyone was in the Explorer and on I-90 by 7:45am. We made good time through the pass and were all very excited as we left the rain behind and beautiful rays of sunshine began to beam down on us. I watched the thermometer on the dash slowly rise as we traveled down the eastern slope of the Cascades. The high for the day would reach 82 degrees. We made a quick pitstop in Ellensburg to refuel where the feisty gas station attendant gave me a hard time for my Doritos and Pop Tart breakfast. Pulling into the parking lot we quickly found out we weren’t the only ones who wanted to escape the rain. 20 or so tents were strewn about the coulee floor beneath the short but fun crag known as the Feathers. Our destination was the Sunshine Wall which was over a mesa and down into neighboring Echo Basin. After some quick gear sorting we threw on our packs and started the quick hike. It’s easy to get lost on the network of trails but keep your eyes out for small metal signs on the desert floor that point you in the right direction. Latigo in his cave of shade

It can be difficult to get your bearings straight at Vantage. The pictures of the routes in the guidebook all look the same and there are hundreds of routes here. So for our first route I suggested we do an easy 5.5 – Carnival Ride – because it was right next to where we were standing and it was easily located. The three of us took turns leading this short but fun chimney climb while Latigo hid in the shade under some large chockstones at the base of the climb. More and more people filtered into the crag and soon there were at least 4 different groups climbing within 40 feet of us. Casey roping up for Rod of God

After cleaning Carnival Ride, Matt led Rod of God (5.8) and Casey and I top-roped it not feeling confident with the distance to the first bolt. There are big solid holds all the way up this free-standing pillar so next time I’m out at Vantage I’ll be able to lead it. Casey after rapping off of the pillar Looking into the Echo Basin towards the Columbia River

After each of us climbed Rod of God we decided to see if we could find an area with less of a crowd. We traveled west along the base of the cliffs to reach the Sunshine Wall. There’s a reason it’s called Sunshine Wall – the sun was beating down pretty heavily on us for the rest of the day. But the wind and occasional cloud cover kept it from being unbearable. We spent a fair amount of time trying to figure out which routes we were standing by. Luckily a pair of climbers recommended we try the route they were on since they were just about to finish. The route – Sunshine Buttress (5.10a) – isn’t in any guidebooks because of how new it is. It has 15 bolts and the climbing goes on and on and on. Matt lead it first and then Casey and I took turns leading it as well. This was a really approachable lead because of how close the bolts are to one another. Most of the time the last bolt is at your waist when you can clip the next one up. I felt like the route was more 5.9 than 10a but I’ll take what I can get. The most challenging part of it for me was having the endurance to complete it. Luckily there are several large ledges where you can take good rests. Matt putting his shoes on before leading Sunshine Buttress (5.10a) Matt clips the first bolt on the buttress Matt near the top of the climb. The guy hanging midair on the right was hanging for 2 hours.

While we were climbing Sunshine Buttress there were a pair of guys practicing some big wall techniques next to us. The belayer had created an anchor about 15 feet up the wall and had been hanging there belaying his partner for 2 hours. He wasn’t a happy camper and we got to listen to the two guys bicker for a couple of hours. Hopefully they get their relationship issues settled before they go climb any big mountains! Casey taking a well deserved rest on a large ledge. Latigo found some rest as well.

After climbing Sunshine Buttress we started talking to a couple who were leading some trad climbs next to us. They suggested we try climbing the route they were on and they offered to set up a top rope for us as they were pulling their ropes down. In exchange, Casey kindly gave them a can of Blueberry Red Bull. “Bob’s Your Uncle” is a 5.11a finger crack. I haven’t climbed a 5.11 for a long while and I’m also really poor at smaller cracks. Matt and Casey went first and did great. The first 3/4 of the climb are really easy and then you get into the thin finger crack at the top where we all struggled a bit. After a lot of hanging and rests on the rope I eventually crawled my way up. I look forward to coming back and climbing it better in the future. Matt entering the crux of Bob’s Your Uncle (5.11a) Making my way into the hard part Me stemming at the crux

We were all getting pretty tired after struggling up the long 5.11 so we decided to do one last climb before heading down to the river for a quick cool off swim. Luckily you can also climb a 5.9 – Steel Grill off the same anchor as Bob’s Your Uncle so I adjusted the anchor for us. Steel Grill is an offwidth crack so you spend a lot of time shoving your knees and body into a large crack and worming your way up the route. Unfortunately the crack was full of a lot of bird poop so it made for a dirty affair. Matt and Casey kicked butt up this route while I really struggled at several points. I’ll blame that on the sun and probably not drinking enough water. Latigo lead the way to the car. Latigo following Casey across the Mesa Good times with the guys

We finished our climbs on Steel Grill and then headed back to the car. After a quick dip in the Columbia – probably Latigo’s favorite part of the day – we headed to the tiny town of Vantage for some burgers and shakes. Not a bad way to spend a Saturday! I had a blast climbing with Casey and Matt and I hope we get to climb more together soon. Burgers and Shakes at Blustery’s Sunset on the patio 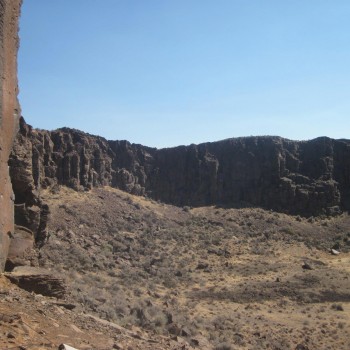 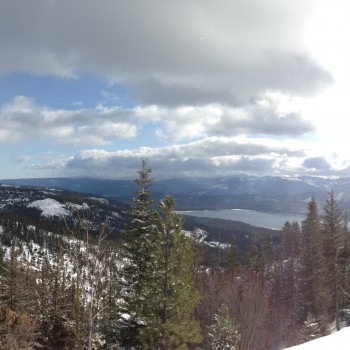 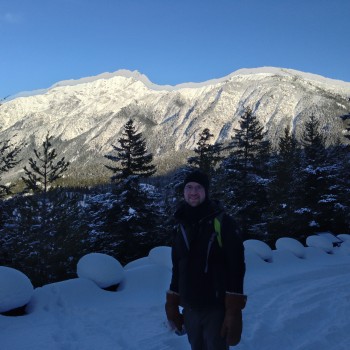 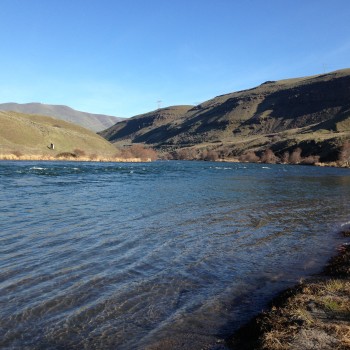 About 2.5 hours from Seattle. Take 90 East from Seattle to Exit 143 (Silica Road). This exit is just a few miles after you cross the Columbia River. From the exit turn left onto Silica Road. Then drive past a collection of small shacks and take a left onto Vantage road – it's the first road on the left. Follow this road down into the basin. You'll first come to the Feathers on your left. There's a gravel parking area 1/4 mile after the feathers with the trail to the Sunshine wall. If you continue on Vantage road you'll end up at the boat launch in a few miles.