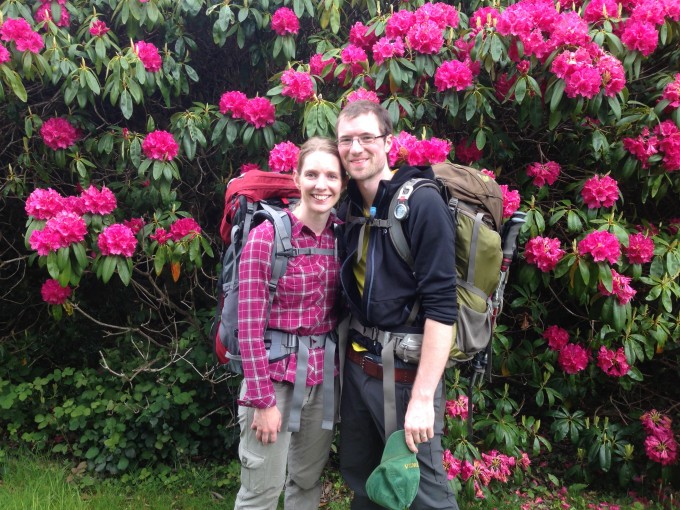 Last night ended on a high note for us. We walked around town, visited some of the local purveyors of tacky souvenirs and ended up at a pub that promoted live music on a large sandwich sign outside. We went in, intrigued by this promise and found ourselves in a large restaurant that had been thoroughly Americanized. A little disappointed, but hungry nonetheless, we ordered food and were grateful for the hardiness of the lamb stew I had ordered and the tastiness of the burger Bobby had ordered. As is our custom, we swapped meals halfway through, meaning 3/4 of my stew was left for Bobby and I got the remaining salad and fries left on Bobby’s plate. I watched as Bobby forced himself to eat until bursting. He’s been very concerned about eating enough calories to stay full while walking during the coming days. Also, for some reason we were continually hungry during that day of travel. Despite the fact that I think we ate a couple of extra meals…

We ordered dessert, a trio of gourmet ice creams that were ridiculously delicious and even came in a waffle bowl! We sipped water and chatted as the place filled with tourists all anxious to hear the music that was to start at 9:00. We decided to give up our table for the many waiting couples, who were of an age that we felt it only polite to give them our table and take their places standing along the wall. The music started and we were greatly pleased by their first song. After that there were two slow, somewhat boring, and very overwroughtly sung songs and then Lord of the Dance. We were beginning to fade as it was past 9:30 and we still had to walk the 3/4 of a mile back to our inn for the night so we left.

We were concerned that jet lag might prevent us from sleeping but we were very wrong! I had set an alarm for 8:00 just in case, and I’m glad I had! We slept remarkably well and were awoken by the alarm. Breakfast was being served at 8:30 and our packed lunches would also be ready then. I once again watched as Bobby force-fed himself ridiculous quantities of food, mind you our kind and gracious hostess was indeed encouraging us to eat as much as we could. We collected our packed lunches from the front desk and were pleased at the amount of food provided. Two large cheese and tomato sandwiches on home cooked bread, two apples, two Cadbury milk chocolate cookie bars, and two boxes of orange juice. We packed our things and went to check out. 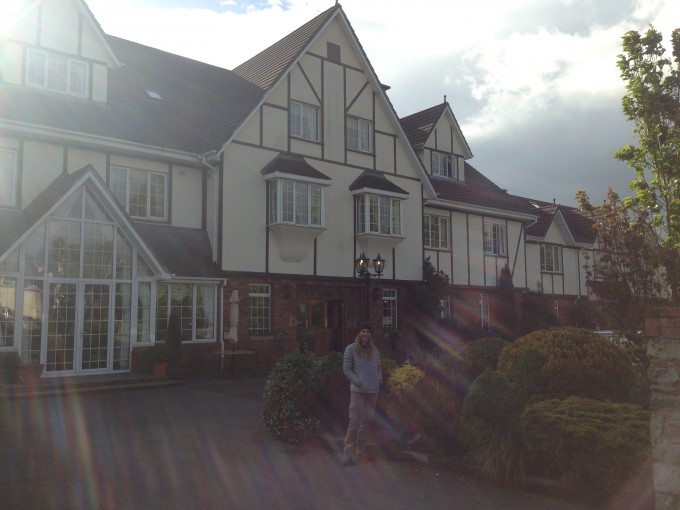 The man at the front desk was as delightful and helpful as the woman we had dealings with the previous day. He felt it necessary to give us directions, despite our having told him we knew where we were going and that we had maps and a GPS. 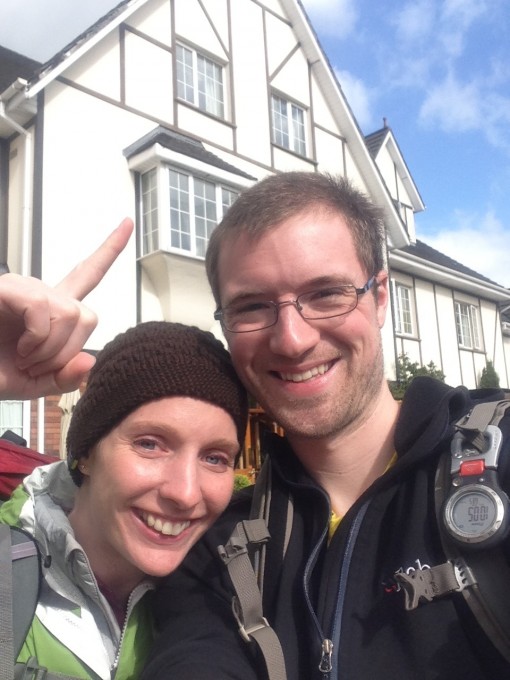 Excited for our first day of hiking!

The first section of the Way was alongside the somewhat busy Muckross Road where we followed a paved biking/walking trail. We eventually turned off the road and into Killarney National Park, a swatch of land 25,420 acres large that was created in 1932. Along this wooded path we encountered several locals out for a morning walk with their dogs. I commented on the beauty of one woman’s dog as she passed and she thanked me and then said, “He’s full of beans!” A sentiment that was oddly perfect for the energetic pup who ran off into the woods without glancing back. We encountered her later on and the dog had been leashed but was energetically pulling at the end of his collar and was soaked from head to toe! Indeed he really was full of beans! 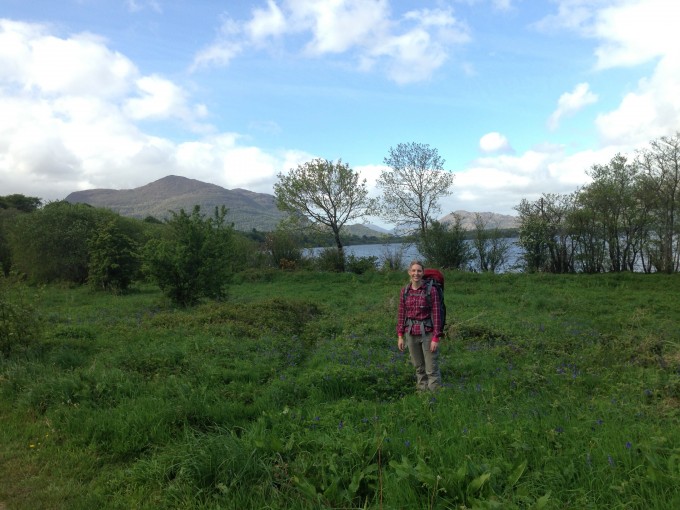 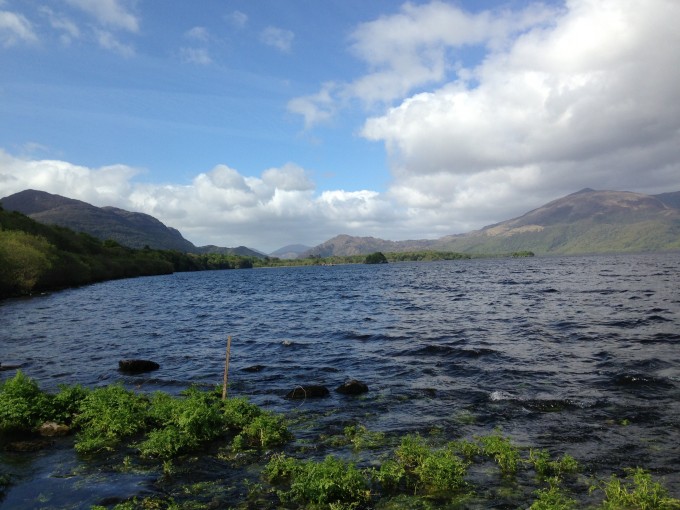 The path followed close to the shores of Lough Leane where we were greeted by ridiculously beautiful views of the mountain ranges beyond. An old cemetery was also along the path that soon led us to Muckross House and Gardens. The house was built in 1843 and was donated as part of the national park by its last owners, Mr. and Mrs. W Bowers Bourn. We walked through the surrounding gardens and were wowed by the beautifully blooming rhododendron everywhere! Rhododendron is an invasive exotic species here but the gardens are known for its nonnative plant life. Horse and buggies, tourists, and tour groups littered the pathways around the estate and we felt a bit out of place with our enormous packs! 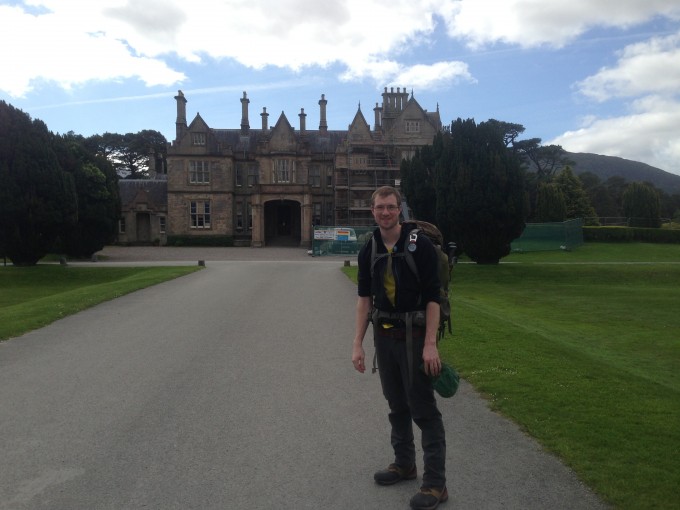 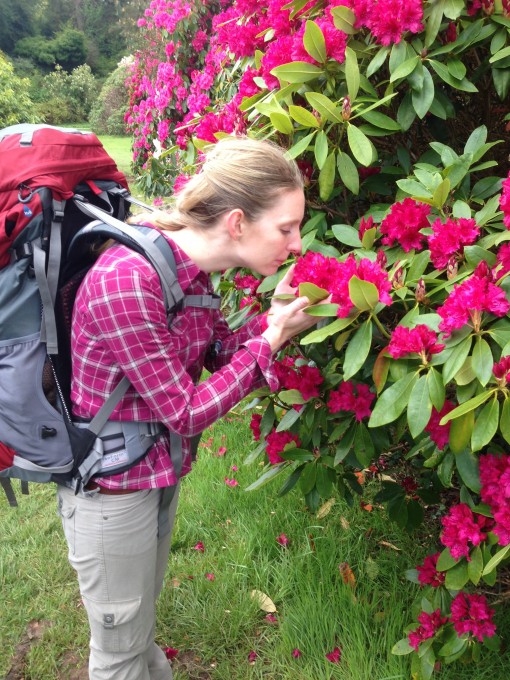 Stopping to smell the rhododendrons 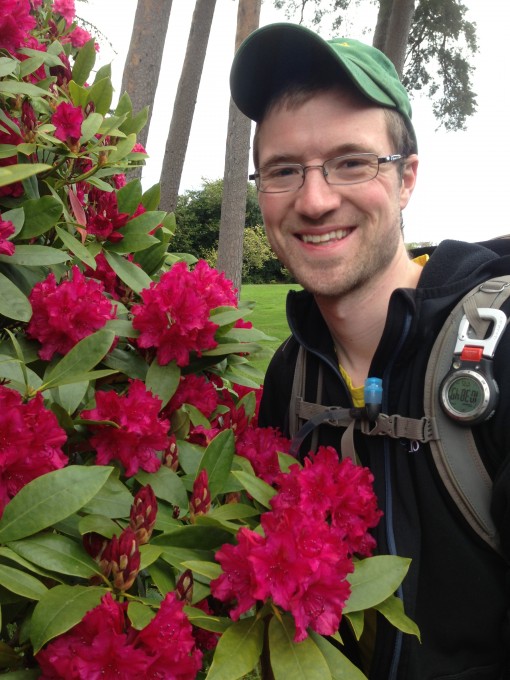 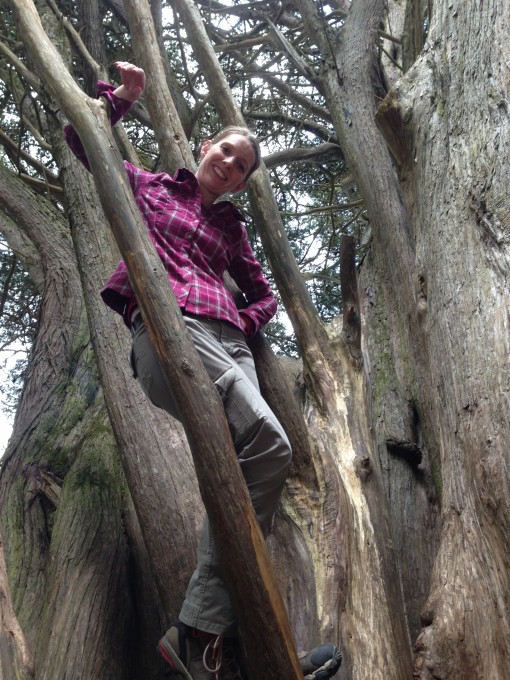 We continued along the trail to Torc Waterfall a popular tourist destination but a great spot for a bathroom break at the building that, during the summer peak months, offers snacks. While the snack shop was closed the bathrooms were, thankfully, open! 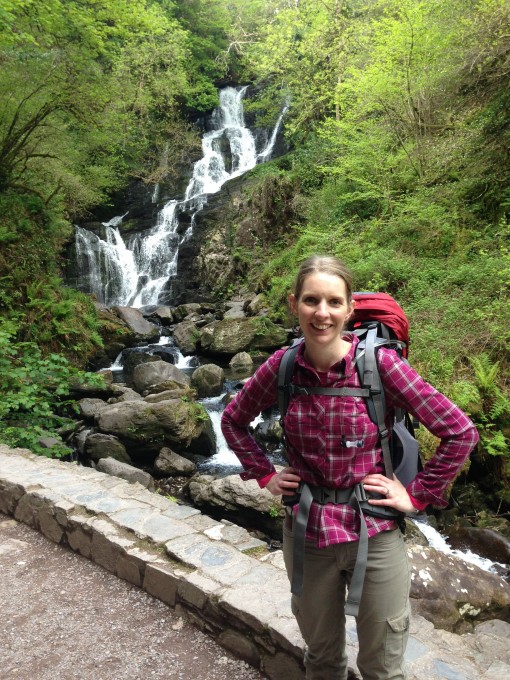 We hiked up the steepish incline and were rewarded with a small but beautiful waterfall. Our trail led us up past the falls and away from the crowds. 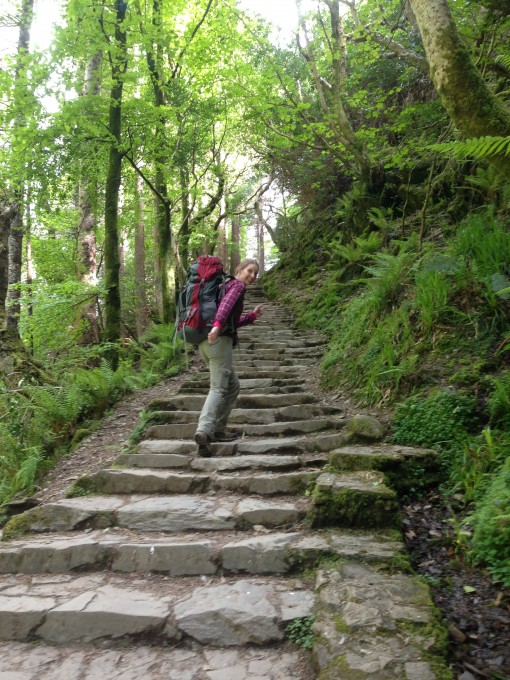 Steps after Torc Falls. Lots of them! 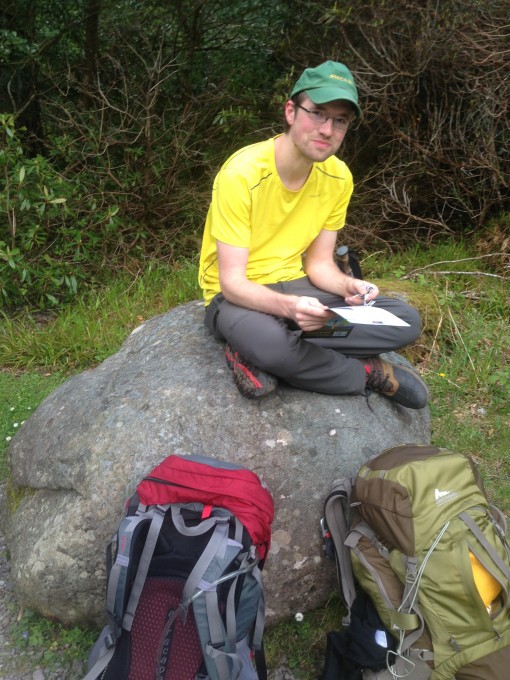 Checking the guide book during lunch.

Soon we were walking along a valley between mountain ranges. The wind was strong but the sun was out and the temperature perfectly cool in the low 50s. We walked through fields of pokey thistle and groves of holly and oak trees. We were frequently delighted with ruins of old buildings and stone walls now derelict and covered in moss and other plants. Our pace was good, averaging almost 2.9 miles per hour for the first half of the hike. As anticipated, we slowed on the second half. Not only were we becoming tired but the trail became more challenging. Rocky, undulating, and a bit muddy we couldn’t help but be grateful for the sunshine we were experiencing! Walking this trail in the rain must be beyond muddy! 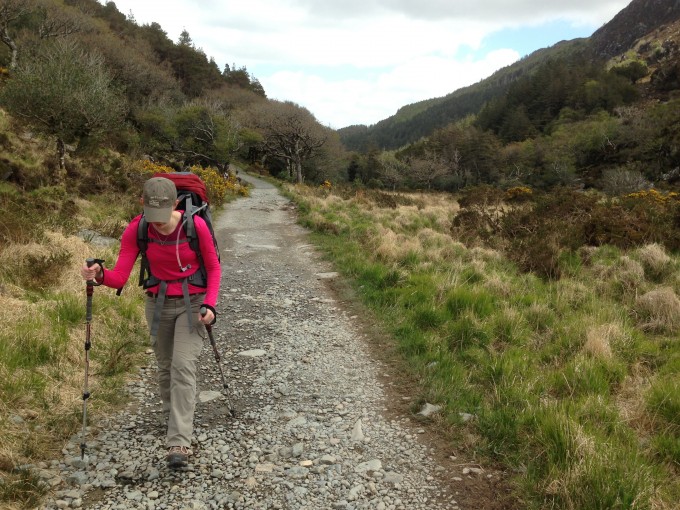 The boggier sections of trail were well built with railroad ties forming a trail above the mushy ground. We were ecstatic when we caught sight of the elusive red deer. The National Park plays host to the only wild red deer population in the country and we spotted one! 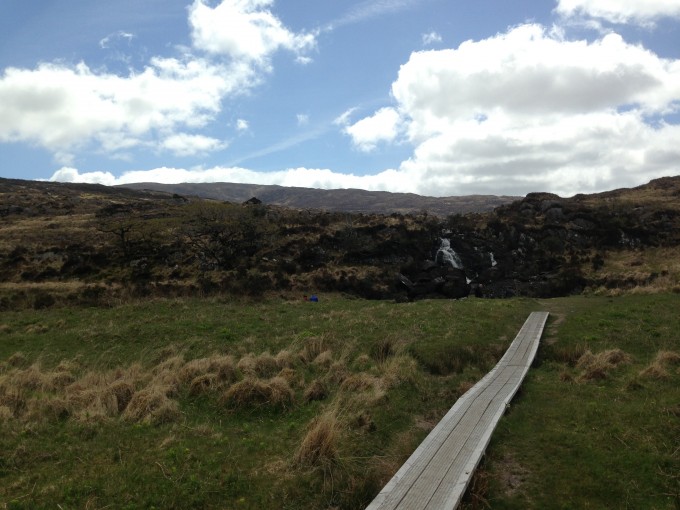 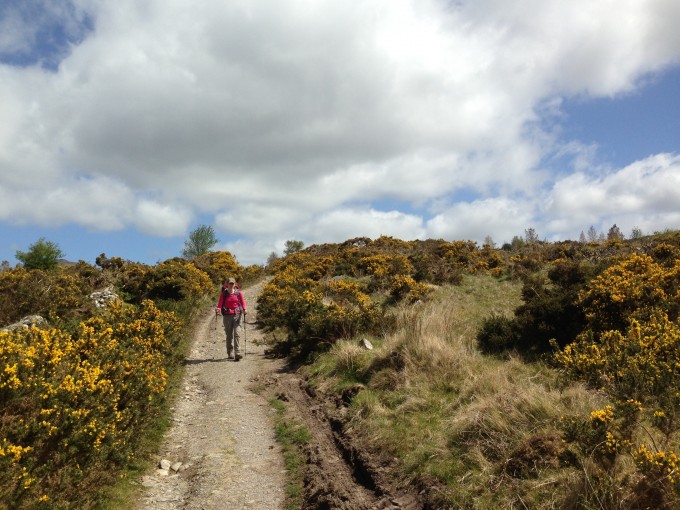 We met several other groups along the way and were surprised that many of them were comprised of people in their 60s and 70s. To know that they were successfully walking at least four miles in made us feel silly for the complaints we were making of our own aches and pains!

The biggest downside of the day would be my sore foot. We think that my boots may have gotten a little misshaped while in my checked backpack on the plane rides. Suddenly, they are bruising my right ankle bone pretty badly. I usually hike with my boots very tight, to prevent blisters from forming on my heels, but today I walked with the right one loose and couldn’t believe the pain. Tylenol definitely helped on the second half of the trip. Hopefully rest tonight will help ease my discomfort for tomorrow.

We couldn’t believe the varying trails we walked on today. At times it was a narrow, rocky path, others were wider gravel trails, we walked on small Tarmac roads, we skirted the shoulder of paved roads, or we trundled along wooden planks. 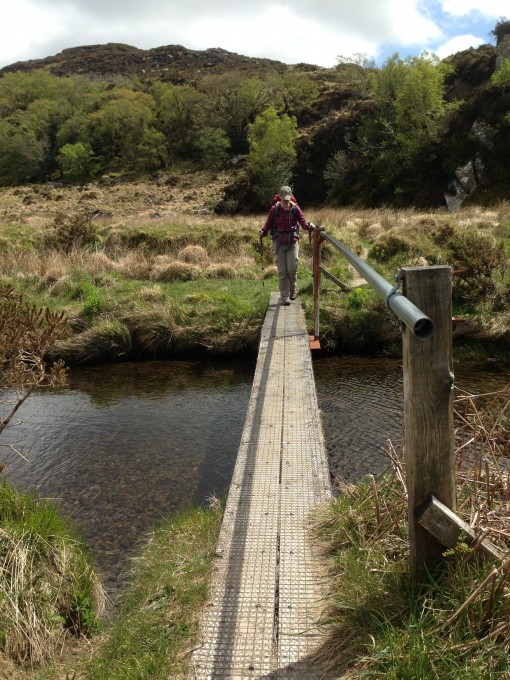 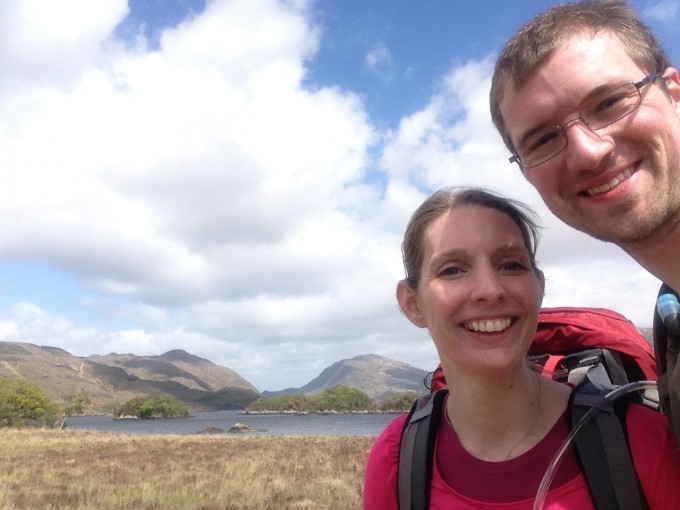 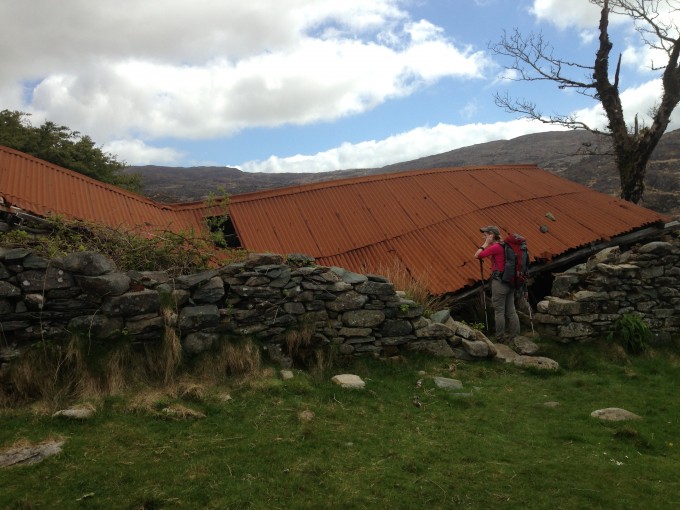 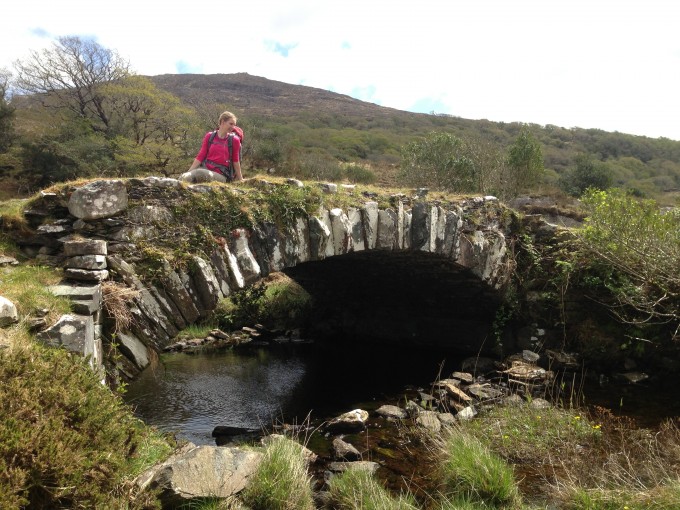 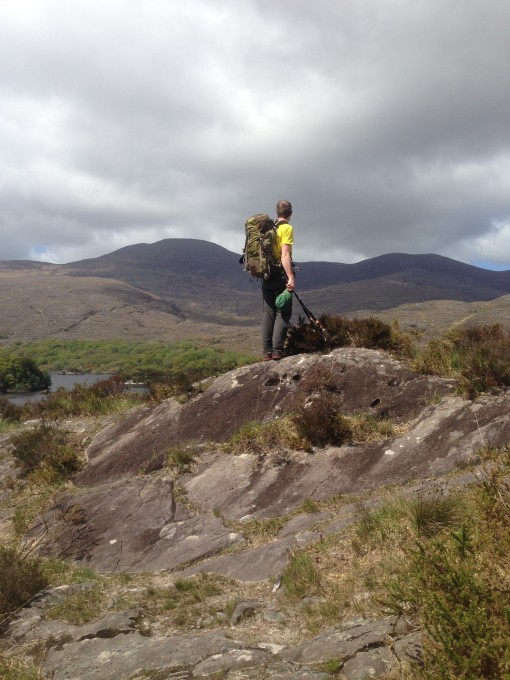 An unusual sight for us along hikes in Washington is farm animals. But here, it’s the norm. We saw galloping horses, snoozing cattle, and bleating sheep sporadically throughout the day.

For now we’re resting up at Hillcrest Farmhouse, the B&B we reserved for the night. The reception from our host was awkward and not super welcoming. Hopefully it gets better since we’ve decided to eat dinner here, rather than walk into town. Some of the oddities were as follows: we were ordered to take off our boots upon entering the house, we couldn’t leave the entryway and were forced to awkwardly remove our sweaty boots while standing and balancing our heavy packs without running into, or knocking each other over in a tiny space. While leading us upstairs he asked if we wanted a room with separate beds… I half expected him to demand to see our wedding rings before allowing us to have the room with a double bed but, thankfully, he didn’t. I saw a glimpse of a woman, presumably this man’s wife, who quickly shut the door of the room she was in rather than come out and greet us. I understand that people like their privacy but maybe they shouldn’t run a B&B then…

Hopefully all goes well and we win them over with our charm at dinner! For now we are enjoying resting up for tomorrows 12 mile day as we listen to the wind whistle and the sheep bleat outside. 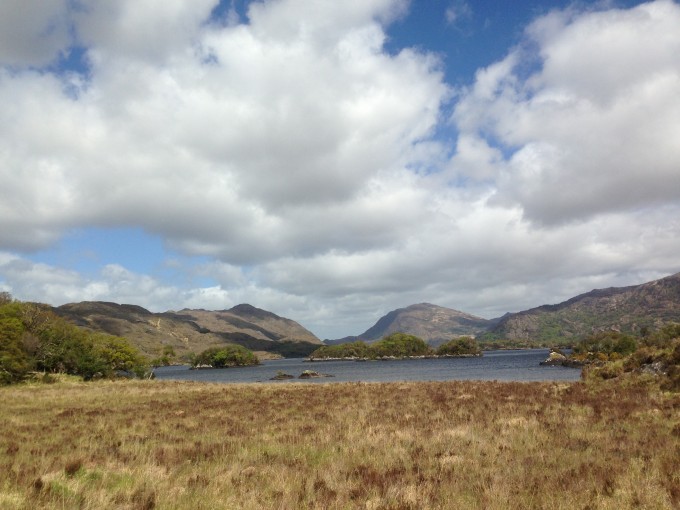 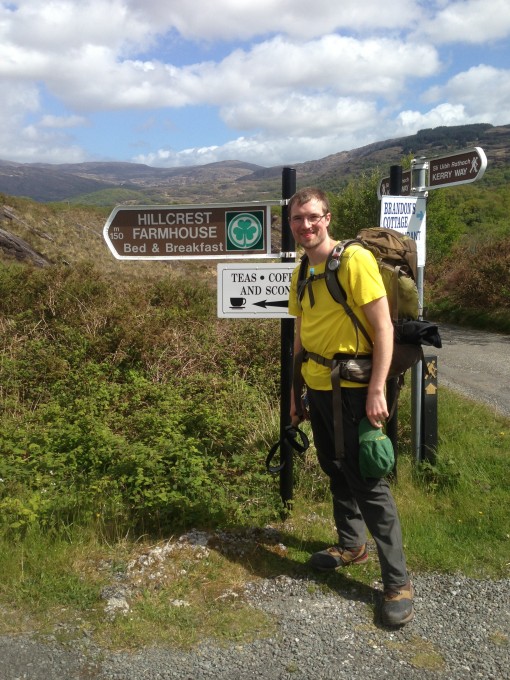 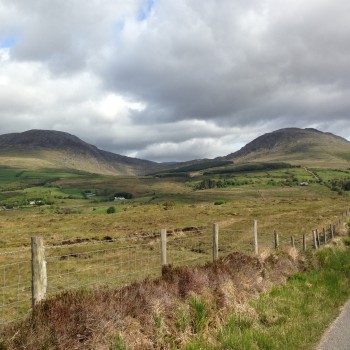 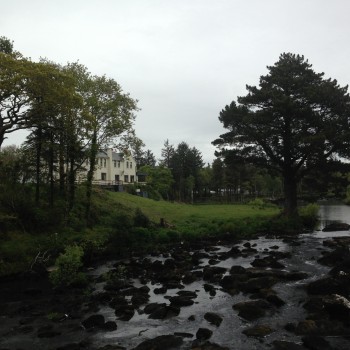 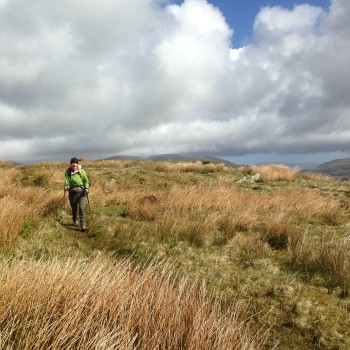 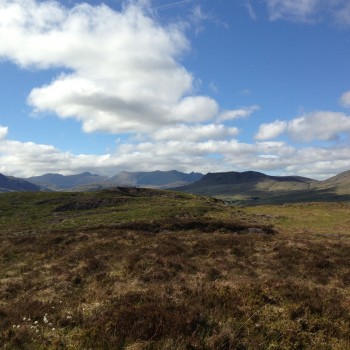